A digital camera uses an array of millions of tiny light cavities or "photosites" to record an image. When you press your camera's shutter button and the exposure begins, each of these is uncovered to collect photons and store those as an electrical signal. Once the exposure finishes, the camera closes each of these photosites, and then tries to assess how many photons fell into each cavity by measuring the strength of the electrical signal. The signals are then quantified as digital values, with a precision that is determined by the bit depth. The resulting precision may then be reduced again depending on which file format is being recorded (0 - 255 for an 8-bit JPEG file).

However, the above illustration would only create grayscale images, since these cavities are unable to distinguish how much they have of each color. To capture color images, a filter has to be placed over each cavity that permits only particular colors of light. Virtually all current digital cameras can only capture one of three primary colors in each cavity, and so they discard roughly 2/3 of the incoming light. As a result, the camera has to approximate the other two primary colors in order to have full color at every pixel. The most common type of color filter array is called a "Bayer array," shown below. 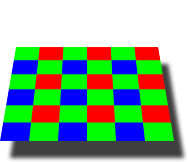 A Bayer array consists of alternating rows of red-green and green-blue filters. Notice how the Bayer array contains twice as many green as red or blue sensors. Each primary color does not receive an equal fraction of the total area because the human eye is more sensitive to green light than both red and blue light. Redundancy with green pixels produces an image which appears less noisy and has finer detail than could be accomplished if each color were treated equally. This also explains why noise in the green channel is much less than for the other two primary colors (see "Understanding Image Noise" for an example). 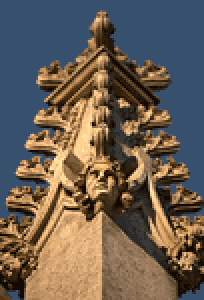 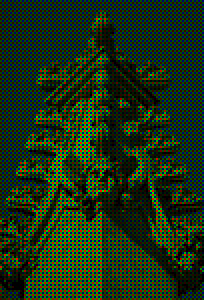 What Your Camera Sees
(through a Bayer array)

Note: Not all digital cameras use a Bayer array, however this is by far the most common setup. For example, the Foveon sensor captures all three colors at each pixel location, whereas other sensors might capture four colors in a similar array: red, green, blue and emerald green.

Bayer "demosaicing" is the process of translating this Bayer array of primary colors into a final image which contains full color information at each pixel. How is this possible if the camera is unable to directly measure full color? One way of understanding this is to instead think of each 2x2 array of red, green and blue as a single full color cavity. 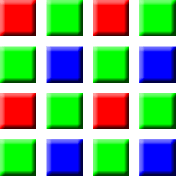 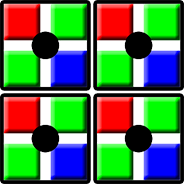 This would work fine, however most cameras take additional steps to extract even more image information from this color array. If the camera treated all of the colors in each 2x2 array as having landed in the same place, then it would only be able to achieve half the resolution in both the horizontal and vertical directions. On the other hand, if a camera computed the color using several overlapping 2x2 arrays, then it could achieve a higher resolution than would be possible with a single set of 2x2 arrays. The following combination of overlapping 2x2 arrays could be used to extract more image information. 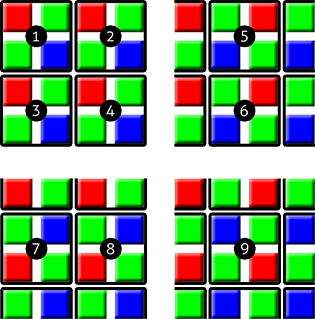 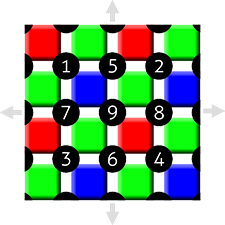 Note how we did not calculate image information at the very edges of the array, since we assumed the image continued in each direction. If these were actually the edges of the cavity array, then calculations here would be less accurate, since there are no longer pixels on all sides. This is typically negligible though, since information at the very edges of an image can easily be cropped out for cameras with millions of pixels.

Other demosaicing algorithms exist which can extract slightly more resolution, produce images which are less noisy, or adapt to best approximate the image at each location.

Images with small-scale detail near the resolution limit of the digital sensor can sometimes trick the demosaicing algorithm—producing an unrealistic looking result. The most common artifact is moiré (pronounced "more-ay"), which may appear as repeating patterns, color artifacts or pixels arranged in an unrealistic maze-like pattern:

Two separate photos are shown above—each at a different magnification. Note the appearance of moiré in all four bottom squares, in addition to the third square of the first photo (subtle). Both maze-like and color artifacts can be seen in the third square of the downsized version. These artifacts depend on both the type of texture and software used to develop the digital camera's RAW file.

However, even with a theoretically perfect sensor that could capture and distinguish all colors at each photosite, moiré and other artifacts could still appear. This is an unavoidable consequence of any system that samples an otherwise continuous signal at discrete intervals or locations. For this reason, virtually every photographic digital sensor incorporates something called an optical low-pass filter (OLPF) or an anti-aliasing (AA) filter. This is typically a thin layer directly in front of the sensor, and works by effectively blurring any potentially problematic details that are finer than the resolution of the sensor.

You might wonder why the first diagram in this tutorial did not place each cavity directly next to each other. Real-world camera sensors do not actually have photosites which cover the entire surface of the sensor. In fact, they may cover just half the total area in order to accommodate other electronics. Each cavity is shown with little peaks between them to direct the photons to one cavity or the other. Digital cameras contain "microlenses" above each photosite to enhance their light-gathering ability. These lenses are analogous to funnels which direct photons into the photosite where the photons would have otherwise been unused. 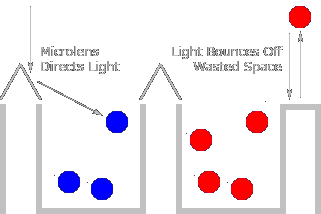 Well-designed microlenses can improve the photon signal at each photosite, and subsequently create images which have less noise for the same exposure time. Camera manufacturers have been able to use improvements in microlens design to reduce or maintain noise in the latest high-resolution cameras, despite having smaller photosites, due to squeezing more megapixels into the same sensor area.