Digital photo restoration can work miracles by turning a faded old family portrait into an image of seemingly modern quality. Alternatively, this process can work in reverse to give a photograph a timeless feel. Performing either of these transformations yourself is not as difficult as it may seem — you just need to know which restoration tools to use. 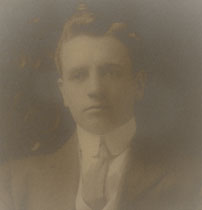 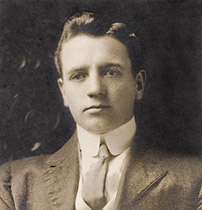 example photo restoration from a scanned print, circa 1900

Although photos can degrade in a variety of ways, this usually includes some combination of fading, color casts (often yellowish), and localized physical damage (such as stains or scratches). Fortunately, photo editing has just the right tools for each aspect:

Each of these will be discussed separately in the sections below, but before that we need to focus on the scanner itself . . .

IT ALL STARTS WITH THE SCANNER

Before any digital restoration can be performed, the original photo (or film negative) needs to be scanned. This step is critical, since it ultimately determines your restoration's potential. Needless to say, try and use the best scanning equipment and software at your disposal. Everything else being equal, flatbed scanners usually provide much higher quality than similar sheetfed scanners.

Scanning Software. Often whichever software came with your scanner will work fine, especially since this caters to the capabilities of your particular device. However, sometimes this can be too limiting, in which case Vuescan and Silverfast are two notable third-party choices. Silverfast is quite powerful if you happen to have the film negative, while Vuescan is more than sufficient (and inexpensive) for printed photos.

Before any editing, first save your original scanned TIFF or RAW/DNG file, and preferably in more than one location. All subsequent editing should be saved in a separate file. Restoration technique, personal preference, intended use and imaging technology all change — potentially requiring a new restoration at a later date (with a photo that has continued to degrade). See the tutorial on archival digital photo backup.

Perhaps the single most common form of degradation is fading. This causes the blacks to become less dark, and the whites to become less light. In other words: the photo begins to lose contrast.

Fortunately, this is also one of the more straightforward ageing artifacts to counteract. The most universal tool for fixing this is probably the levels tool in Photoshop (and other image editing programs). Move your mouse over the before and after labels below to see how the levels tool changes the example photograph:

The image histogram needs to extend across as broad a range of tones as possible (from left to right above), but not so much that this detracts from the (presumed) mood of the original photograph. For example, many types of old photos never had fully black or white regions — even when brand new — giving these a softer and subtler appearance.

Other specific tips on contrast-enhancement include: 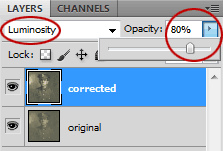 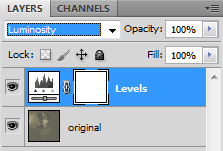 The same tools of opacity, duplicate layers and adjustment layers are also helpful in the next two sections . . .

Fading is one thing when it simply reduces contrast, however it can become harder to restore — and more unsightly — if the photograph develops an unrealistic color cast. This appears as the familiar "yellowing" of photos — even in those from a few decades ago. 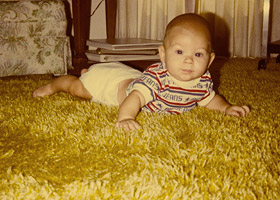 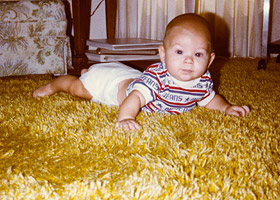 The upper portion of the white diaper was clicked on using the dropper tool for the above correction.

Using the "white balance dropper tool" is often the easiest technique since it has the potential to neutralize color casts in a single step. Use the dropper tool on a region which you believe to have been (i) light neutral gray, (ii) receiving most of its illumination from the primary light source and (iii) not tinted by light bouncing off nearby colored objects.

On the other hand, sometimes there just isn't an object which satisfies the above requirements — in which case you'll need to resort to one of the following:

Regardless, achieving just the right color balance can be highly subjective and there isn't always one right answer. When in doubt, it's generally a good idea to err on the side of having a photo that appears slightly warmer versus cooler, or has slightly more magenta as opposed to green coloring. Experiment with the mouseover buttons below the image to the right to see for yourself.

Complications. Perhaps the most common problem is that old photos don't always develop color casts uniformly. This might be due to how the photo was stored, or could even be a result of the chemistry of the photographic paper.

Non-uniform color casts unfortunately complicate the correction process because they require targeted adjustments. For example, if one shifted a photo's overall color balance to remove a yellow cast in the shadows, this would cause the midtones and highlights to appear bluish, or vice versa. In such cases, one needs to apply color corrections selectively, either by specifying highlights or shadows within this color balance tool, or by performing color correction with the curves tool on the individual color channels.

However, other times localized color casts are caused by stains — and not some gradual process affecting the entire image. In that case, one might be better off just blending or removing these regions entirely, as discussed in the next section. . .

Old photos have likely incurred plenty of imperfections in the form of dust marks, rips or tears, stains, scratches and crinkles. These can distract from the image — particularly if located on or near someone's face: 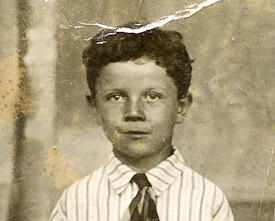 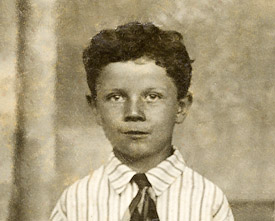 Conservative restoration using only cloning and healing brush tools; some imperfections still remain.
Move your mouse over the image on the right to directly compare before/after versions.

By far the best tools for removing these are the clone stamp and healing brush tools (in Adobe Photoshop and most other editing software). These are in fact the only two tools used to restore the above image. Each tool has the following effect:

Each tool may require extensive practice until either is used to maximal effect. Both require clicking at least twice: once (while holding ALT/option key) to select the source, then again for the target. General tips and best-practices include:

Move your mouse over the image below to see the combined effect of these tools on a large print that was digitally reassembled from torn pieces:

Restoration required extensive cloning since tears were across detailed brick textures. Photo circa 1929.

Photo restorations require many interpretive decisions, so careful judgment is a critical aspect of the restoration process. Before you even touch the photo, ask yourself: what do you hope to accomplish, and which aspects are of highest priority to improve? Do your restorations maintain the original mood of the photo, or is that even important? All of these can influence your choice of several seemingly equal approaches to restoration.

Regardless, take your time! Proper removal of physical imperfections such as stains or scratches can be quite involved, so do not (always) expect miracles with just a few minutes of work. 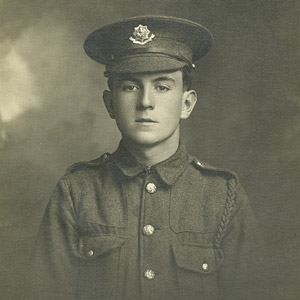 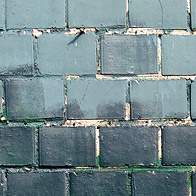