Levels is a tool in Photoshop and other image editing programs which can move and stretch the brightness levels of an image histogram. It has the power to adjust brightness, contrast, and tonal range by specifying the location of complete black, complete white, and midtones in a histogram. Since every photo's histogram is unique, there is no single way to adjust the levels for all your photos. A proper understanding of how to adjust the levels of an image histogram will help you better represent tones in the final image.

The levels tool can move and stretch brightness levels in a histogram using three main components: a black point, white point and midtone slider. The position of the black and white point sliders redefine the histogram's "Input Levels" so they are mapped to the "Output Levels" (default is black (0) or white (255), respectively), whereas the midtone slider redefines the location of middle gray (128). Each slider is shown below as they appear in Photoshop's levels tool, with added blue labels for clarity:

All examples below will use the levels tool on an RGB histogram, although levels can also be performed on other types of histograms. Levels can be performed on an individual color channel by changing the options within the "Channel" box at the top.

When considering adjusting the black and white point levels of your histogram, ask yourself: is there any region in the image which should be completely black or white, and does the image histogram show this?

Most images look best when they utilize the full range dark to light which can be displayed on your screen or in a print. This means that it is often best to perform levels such that the histogram extends all the way from black (0) to white (255). Images which do not extend to fill the entire tonal range often look washed out and can lack impact. The image below was taken in direct sunlight and includes both bright clouds and dark stone shadows — an example of where there should be at least some regions that are portrayed as nearly white or black. This histogram can be extended to fill the entire tonal range by adjusting the levels sliders as shown: 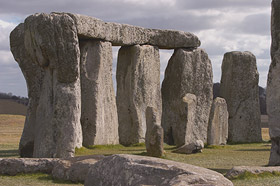 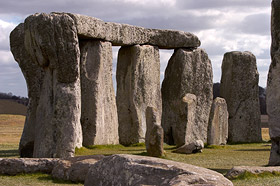 On the other hand, be wary of developing a habit of simply pushing the black and white point sliders to the edges of the histogram — without also paying attention to the content of your image. Images taken in fog, haze or very soft light often never have fully black or white regions. Adjusting levels for such images can ruin the mood and make your image less representative of the actual scene by making it appear as though the lighting is harsher than it actually was.

One should also be cautious when moving the black and white point sliders to the edge of the histogram, as these can easily clip the shadows and highlights. A histogram may contain highlights or shadows that are shown with a height of just one pixel, and these are easily clipped. This is often the case with low-key images (see histograms tutorial), such as the example shown below: 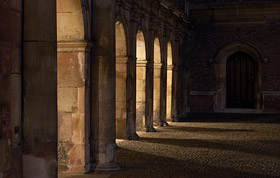 No Pixel at Full Brightness 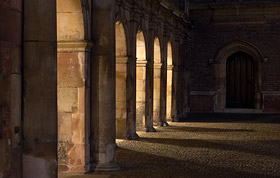 Holding down the "ALT" key while dragging the black or white point slider is a trick which can help avoid shadow or highlight clipping, respectively. If I were to have dragged the highlight slider above to a point which was farther left (a level of 180 was used, versus 235 above), while simultaneously holding down ALT, the image would have appeared as follows: 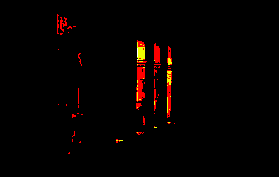 If the image is fully black while dragging a black or white point slider, then no clipping has occurred. When the slider is dragged over where there are counts on the histogram, the regions of the image which have become clipped get highlighted as shown above. This can be quite useful because knowing where the clipping will occur can help one assess whether this will actually be detrimental to the artistic intent of the image. Keep in mind though that clipping shown while dragging a slider on an RGB histogram does not necessarily mean that region has become completely white — only that at least one of the red, green, or blue color channels has reached its maximum of 255.

Moving the midtones slider compresses or stretches the tones to the left or right of the slider, depending on which direction it is moved. Movement to the left stretches the histogram to the its right and compresses the histogram to its left (thereby brightening the image by stretching out the shadows and compressing the highlights), whereas movement to the right performs the opposite. Therefore, the midtone slider's main use is to brighten or darken the midtones within an image.

When else should one use the midtone slider? Consider the following scenario: your image should contain full black and white, and even though the histogram extends to full black, it does not extend to white. If you move the white point slider so that it reaches the edge of the histogram, you end up making the image much brighter and overexposed. Using the midtone slider in conjunction with the white point slider can help you maintain the brightness in the rest of your image, while still stretching the highlights to white: 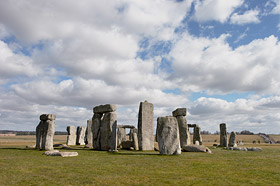 Sky Not At Full Brightness 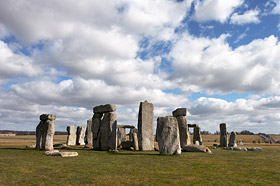 Note how the sky became more pronounced, even though the overall brightness of the image remained similar. If the midtones tool were not used, the image to the right would have appeared very overexposed. The same method could be used to darken the shadows while maintaining midtones, except the midtones slider would instead be moved to the left.

Note: Even though the midtones slider is always initially at 128, it is instead shown as 1.00 to avoid confusion when the black and white points change. This way, the midtones slider is always at 1.00 even when the other sliders have been moved. The midtone "Input Level" number actually represents the gamma adjustment, which can be thought of as a relative measure of the number of levels on the sliders left to those on its right. Thus, values greater than one mean there are more levels are to the slider's right, whereas values less than one mean more levels are to its left.

ADJUSTING LEVELS WITH THE DROPPER TOOLS

The histogram levels can also be adjusted using the dropper tools, shown below in red:

One can use the dropper tools on the far left and right to set the black and white points by clicking on locations within the image that should be either black or white, respectively. This is often not as precise as using the sliders, because one does not necessarily know whether clicking on a given point will clip the histogram. The black and white point droppers are more useful for computer-generated graphics as opposed to photos.

Unlike the black and white point droppers, the middle dropper tool does not perform the same function as the midtone slider. The middle dropper actually sets the "gray point," which is a section of the image that should be colorless. This is useful when there is a colorless reference object within your scene; one can click on it with the dropper tool and removing color casts by setting the white balance. On the other hand, it is better to perform a white balance on a RAW file format since this reduces the risk of posterization.

OTHER USES FOR THE LEVELS TOOL

Levels can also be used to decrease the contrast in an image by modifying the "Output Levels" instead of the "Input Levels." This can be a useful step before performing techniques such as local contrast enhancement since it avoids clipping (because this technique may darken or brighten the darkest or brightest regions, respectively), or when your image contains too much contrast.