Digital cameras have opened up amazing new photography possibilities. The following is an overview of several digital techniques that were on this website in the beginning. It now serves as a motivator to delve into the various techniques available in the digital world. Each technique has links to more detailed advice if you want to learn more...

Camera equipment has made great strides in being able to mimic our visual perception in a single photograph. However, despite all of this progress, many key limitations still remain. Our eye can discern a far greater range of light to dark (dynamic range), is able to realize a broader range of colors (color gamut), and can assess what is white in a given scene (white balance) far better than any photographic equipment.

Photographers have to be aware of these and other shortcomings in order to emphasize the elements of a scene as they see them. Overcoming these often requires interpretive decisions both before and after the exposure.

When we view a scene, we have the luxury of being able to look around and change what we are analyzing with our eyes. This ability is quite different from what a still camera is able to do with a given lens; it is the implications arising from this that are discussed in the three sections below:

Each technique can evoke a heightened emotional response in the viewer, by emphasizing not only what one wishes for them to see, but also how they would like them to see it.

Our eyes can choose to have any particular object in perfect focus, whereas a lens has to choose a specific focal point and what photographers call a "depth of field," or the distance around the focal plane which still appears to be in sharp focus. This difference presents the photographer with an important interpretive choice: does one wish to portray the scene in a way that draws attention to one aspect by making only that aspect in focus (such as would occur during a fleeting glance), or does one instead wish to portray all elements in the scene as in focus (such as would occur by taking a sweeping look throughout).

Until recently, traditional photography was especially restricted with this choice, because there is always a trade-off between the length of the exposure, the depth of field, and the image noise (or film grain) for a given photo. Where artistic flexibility is required, one could use a technique which utilises multiple exposures to create a single photo that is composed of several focal points. This is similar to how our eyes may glance at both near and distant objects in a far-reaching scene.

If you were to stand in front of the above scene and take a quick glance, either the first or the second image would be closer to what you would see, depending on what you found interesting. On the other hand, if you were to fully absorb the scene—analysing both the the stone carvings in the foreground as well as the bridge and trees in the background—then your view would be represented more realistically by portraying details for both regions, such as the final image on the right. This technique allows a photographer to decouple themself from the traditional trade-off between depth of field, noise or film grain, and length of exposure. The end result is a print that has both less noise and more image sharpness throughout.

As we look around a scene, the irises within our eyes can adjust to changing conditions as we focus on regions of varying brightness—both extending the dynamic range where we can discern detail, and improving the local contrast. This is apparent when we stand near a window in a dark room on a sunny day and see not only detail which is indoors and around the window (such as the frame or the pattern on the curtains), but also that which is outside and under the intense lighting (such as the blades in the grass in the yard or the clouds in the sky).

Cameras, on the other hand, cannot always capture such scenes where the brightness varies drastically—at least not with the same contrast as we see it. Traditional landscape photography has practiced a technique to overcome this limitation by using a camera lens filter which lets in more light in the darker regions, and less light in the brighter regions, 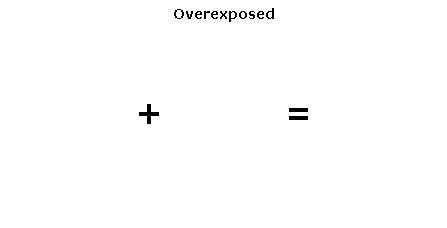 This works remarkably well, however it is limited to photos with a simple distribution of light intensity, since a filter has to exist which approximates the light distribution. This usually limits the photographer to photos consisting of a bright sky, which gradually transitions into a darker foreground, such as the filter shown below.

Other scenes, such as those which contain alternating electrically-lit and moonlit objects, contain far more complex lighting geometries than can be captured using traditional photographic techniques. To increase the dynamic range captured in a photo, while still retaining the local contrast, one can expose the photo several times: once for each region where the light intensity changes beyond the capabilities of their equipment. This is adapted from a similar technique used in astrophotography. By exposing the photo several times for each intensity region, one then has the ability to combine these images for any arbitrary lighting geometry—thus diversifying the types of scenes one can reproduce in photographic print.

For much more on this topic, also take a look at the tutorial on using the high dynamic range (HDR) feature of photoshop.

By looking around a scene, we are able to encompass a broader field of view than may be possible with a given lens. To mimic this behaviour, and to enhance image detail, one could point the camera in several adjacent directions for each exposure. These could then be combined digitally in a way that accounts for lens distortion and perspective— producing a single, seamless image. This is technique is referred to as photo stitching or a digital panorama.

In the example below, a lens with a relatively narrow field of view (just 17° horizontally, or 80mm on a 35mm camera) was used to create a final image that contains both more detail and a wider field of view than would be possible with a single exposure. As you can see by comparing the before and after images below, creating a single image from a mosaic of images is more complicated than just aligning these images; this process also has to take into account perspective. Note how the rooftop appears curved in the upper image, whereas the rooftop is straight in the final print.

The final result is a perspective that would have required a lens which horizontally encompasses a 71° field of view. An added bonus is that the final image contains over 6X the detail and local contrast than what would have been captured with a single photograph (if one also happened to have such a lens).

You can view the digital photography tutorials for a more detailed and technical description of many of these photographic concepts... 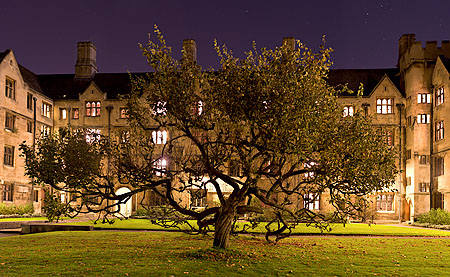